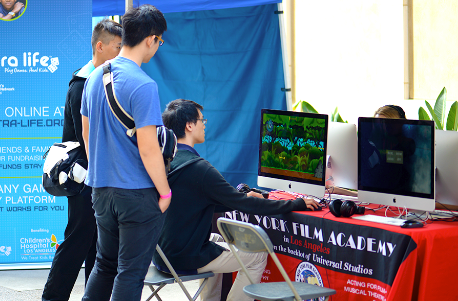 Some of the best independent video games in and out of development are being showcased at the IndieCade Festival this weekend at Little Tokyo, Downtown Los Angeles.

Many of the games are developed solo, by self-taught programmer-artist-designers. Others are developed by students at some of the world’s top game development universities.

As such, these games exude experimentalism. Unrestrained by the shackles of mass-appeal and commonly driven by one person’s uncompromising vision, indie games are free to explore the limits of the interactive medium in new and daring ways.

Take for instance, the “Santiago VR Experience” developed by students at USC, which has players donning a VR headset and touching a physical sculpture of a blobfish on a pedestal to produce visual and auditory effects in-game. It’s beyond bizarre.

Meanwhile, UCSC goes beyond the screen in their demonstration of “SceneSampler”, a real-life social game which has pairs of players identifying social situations in a festival area. For example, a pair may be asked to identify a ‘quiet group’. After photographing and recording the ambient noise (with the group’s consent), they’ll upload the data and, after acquiring multiple entries, form a sociospatial map of the area. The game’s development was lead by UCSC Prof. Katherine Isbister, who was also present at the festival.

In fact, virtually all of the eight universities (USC, UCSC, NYU, NYU Film School, MSU, Chapman, Abertay, and DePaul) had professors and faculty members on-site. DePaul University’s Prof. Bobby Schweizer was often seen guiding festival-goers through their Microsoft Hololens demo, which has players playing a sun-god with the ability to set wildlife and villages on fire with only their gaze.

The majority of the games showcased are – true to the name – independent and developed without the support of a major academic institution. But that doesn’t make them any less compelling.

For me, the most memorable experience comes from Natalie Lawhead’s “Everything is going be OK!”, a psychedelic collection of interactive animations that serve some profound statement on depression and human struggle. One particular sequence had me watch an adorable rabbit-creature fall and impale itself on a spike. As it painfully slid down towards its doom, it asked me nihilistic questions like “If I were more human and more important would this have happened?” I tried my best to choose the most inspiring and motivational replies, but was ultimately unable to help as the end drew nearer and nearer. I was left unsettled, and will probably remain so for a long, long time.

A&E/Features Editor At The Aztec