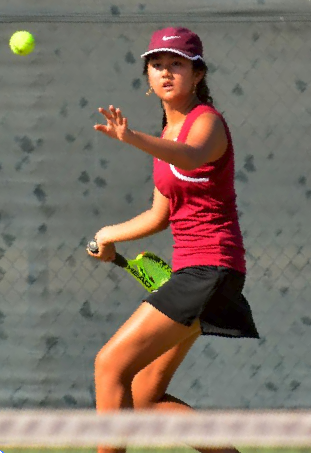 Girls varsity tennis team lost 5 to 13 against the Rosemead Panthers on Monday, October 16. To some of the team members, the lost was expected. The line-up was reorganized to allow some players to play higher positions. As a result, many players were inexperienced when they faced the Panthers’ better players. Despite their lost, Coach Mary thinks “as long as they’re trying their hardest, even if they lose, it’s fine by [her]” as she just wants them to try their best.

Many of the players stated that their mentality was at ease since this was a practice match. However, the players still gave it their all. Senior Allison Quach was unnerved as a starter for the second team of doubles. Because of her partner, Quach says “I still pushed myself” to try to win their game.

Aside from fulfilling one’s job as a doubles partner, encouragement comes from many sources such as an audience’s cheer. As seen in a singles match, Senior Lauren Lu was down at the start, but due to cheering from the stands, Lu was able to overcome her slump. “I hit this one shot, and then [the audience] started clapping for me. That was so nice.” Lu claims that hit to be the most memorable from her game. Despite the lost, the players look forward to a great season-ending league final. Coach Mary commented that she will “have them run more, work on their reaction times, and [the doubles] work on their teamwork, communication, and technique.”