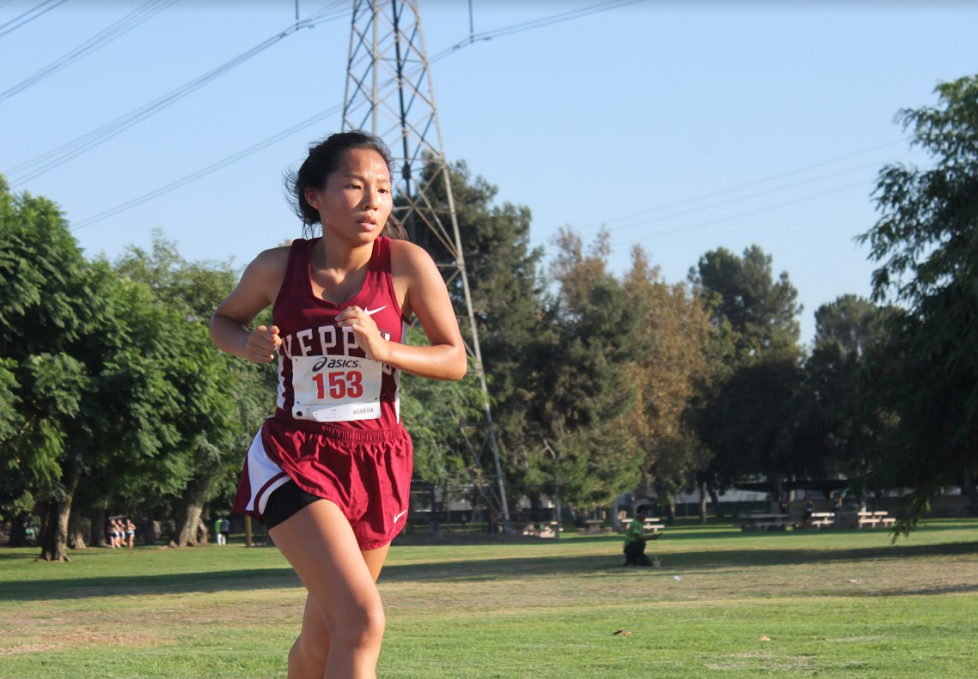 Senior Emily Wu sprints the last stretch of her 200m race after seeing the finish line. THE AZTEC/KEVIN LIU

At a course length of three miles circling two lakes, runners like freshman Raymundo Guiterrez and senior and Cross Country captain Dillon Garcia strove to make their best time yet, along with varsity member Lucas Gonzalez.

In the freshman and sophomore division, Guiterrez was the first person from Mark Keppel to reach the finish line. “We have a strong team,” said Guiterrez after the meet. Though he was not disappointed in his time, he was not satisfied either. “I should have put more [focus] on… the mental [game]; once you break the mental [barrier of loss], then nothing can stop you.”

Coach Romero has been implementing training techniques such as track distance and speed work, off-campus runs, and weight training days in order to prepare for this and future meets. Despite mixed results, Romero hopes to bring the training to the next level, planning to do “push-ups and pull-ups to develop their upper bodies as they develop heart and leg strength.”

“Those who attended regularly, who got most of their needed rest and nutrition, and who accepted that they were getting stronger even though the muscle mass was not as noticeable, are the ones who ran with more confidence and who showed marked improvement from the beginning of the season,” notices coach Romero.

Guiterrez also noted that he did not particularly feel comfortable with the course’s layout. “Honestly, I don’t really like flat ground. I like running hills; I could’ve done better if there were hills.” Despite this, he looks to improve in their last meet, which will be on November 1st.

Lucas Gonzalez, a member of the junior varsity division in Cross Country, trailed behind captain Dillon Garcia and other runners from schools such as Schurr.

“You just gotta fight through [all the pain],” notes Gonzalez. “[And] if we train hard this week and take care of our bodies, we can all at least [beat our personal record].”

As for their last meet of the season on November 1st, coach Romero plans to be at the lake earlier to take yearbook pictures, play a foosball game, and celebrate the end of the season.

“We are going to train very hard prior to November 1st… [where] we plan to have a meet where our runners are happy and relaxed,” adds coach Romero. “[We’re going to] try to have a festive atmosphere knowing that we worked hard and that we are going to go all out with a decision to endure more pain than usual.”

After finishing his race during the meet, sophomore Kyton Chan surprisingly went fishing in one of the lakes and caught a catfish measuring a little over one foot long.