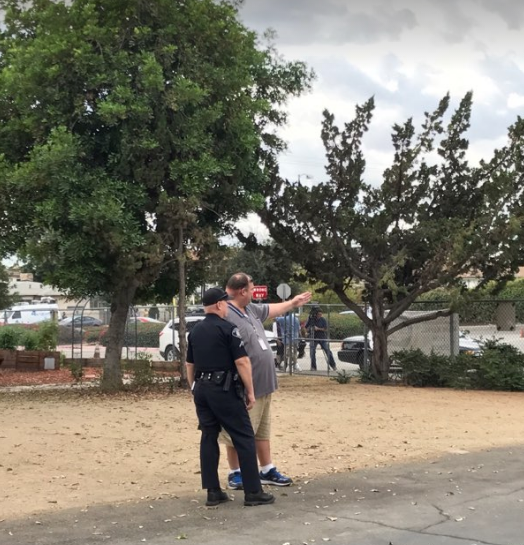 The driver of a stolen Honda Accord was taken into custody Friday afternoon at the Mark Keppel High School campus after attempting to flee from police in a high speed car chase.

The intense car chase started in East Hollywood and saw the suspect dash down the 110 freeway at speeds of nearly 90 mph. He then entered an East LA neighborhood and weaved his way through traffic into the San Gabriel Valley, running rampantly through red lights and nicking several cars in the process.

As the suspect continued to flee, he attempted to get on the 10 freeway, but damaged one of his tires trying to squeeze past fellow motorists. The driver was forced to pull over on the freeway and jump the wall separating the freeway and a campus parking lot.

Once inside the campus parking lot, he attempted to enter the campus, but was apprehended by the head of campus security Larry Profitt, and Special Education aide Henry Torres. The police arrived promptly to the scene and took the man into custody.

The school was only put under lockdown following the arrest of the suspect, but Principal John Scanlan maintained that it was for precautionary measures.

Students around the campus were stunned as the unexpected lockdown was called during their lunch period. Junior Shannon Fong recalled her experience with the incident, claiming that she was “glad that [my friend] brought me into the gym to take a picture, because had I been outside, I would’ve panicked.”

Although panic was indeed a widespread feeling among students, Principal John Scanlan was proud of the way in which his school responded to the incident.

“Overall, I think our kids and staff did a tremendous job. They reacted exactly how they did yesterday during our [lockdown] drill and did as they were supposed to do,” said Principal Scanlan.

However, both Principal Scanlan and Profitt asserted that there was still room to improve in response to an emergency situation.

“Some students didn’t respond as well because of our tendency to go through the motions during drills. We need to have better cooperation to instructions and just learn from what we do,” said Profitt.Principal Scanlan also pointed to the students’ tendency to record everything hindering their pursuit of safety. “The ones out [near the incident] were still standing there recording instead of moving to safety, which I get because of the way things are nowadays, but the first thing we’ve got to care about is our safety.”

Ultimately, the safety of the school is the biggest concern, and Fong epitomized the mindset of many, claiming that, “in the end, I’m just happy that the suspect was caught and that no one got hurt.”