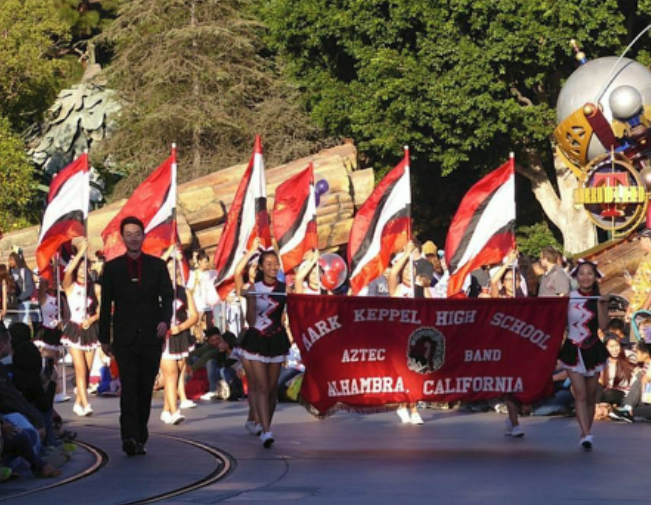 The Aztec Band and Color Guard participated in the Disneyland parade on November 4. They have prepared long and hard for their performance and have given their best effort to perform to the public eye. The band performed their competition march “March Grandioso” and the Color Guard performed their standard routine. The parade began at 4 p.m. and the parade lasted roughly a half an hour to an hour based on where they began the parade.

Junior Tyler Lao said, “We often practice two days a week for usually three hours at a time for each practice.” Lao has been in band for three years now and has dedicated much of his time to this parade. He has given the best of his efforts to perform live in front of many people.

“It’s exciting…Everything is very new and [amazing] that I am getting to do this for the first time.,” said Freshman Matthew Huitron, new color guard member. Firsthand experiencing a performance in Disneyland had Huitron a little nervous about his performance. He has practiced a lot with other Color Guard members and has made made great efforts. Freshman Katie Ly said, “I feel like it is both a fun experience for color guard as a whole because we practiced so hard for the [Disneyland Parade], and since we get the whole day at the [theme park] with everyone, I would say that it’s a good way to make memories, too.” Ly is also a first year member, along with Huitron, and together have given their all towards the performance. Ly has made this experience out to be a positive memory and a step forward with her colleagues toward future events.

The cost for the trip was extremely exceptional. The fees for transportation and entry into the theme park was completely free. Band director, Mr. Lee stated, “The great thing about this is the students get to represent their school and community at the happiest place on earth while enjoying the park for free.”With free admission into the theme park and no worries about transportation, the students and the adults went peacefully. They enjoyed the time that they spent there with their fellow Aztecs, enjoying their time of bonding.