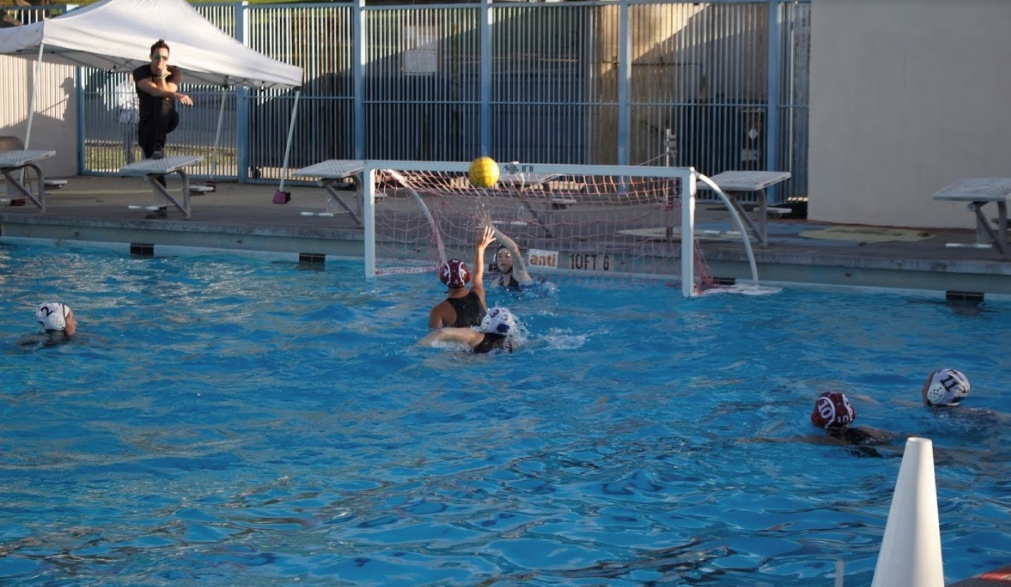 Senior Maya Castelazo (4) attempts to score in a one-on-one confrontation with the opposing goalkeeper. THE AZTEC/CALLISTA LIU

During the game, the team was consistent in their attack against the Wildcats, maneuvering the ball around to open teammates and taking every chance to shoot for the goal. Despite missing some shots and a few failed attempts to score on rebound shots, the girls kept an offensive play for both halves and were able to outplay their opponents. The girls also switched into few defensive plays when the opponents managed to close in on their goal, preventing the Wildcats to score multiple shots.

Of the fourteen games the team had played so far, this specific match was deemed easier than others. Senior Catherine Go, a new addition to this year’s varsity team, expected the team to score as they did. “This game was not that intense,” sa Go, “It was pretty easy because we practiced hard.”

As Keppel’s head varsity coach for girls’ water polo since 2015, Wendy Centeno was also unfazed by the victory. She noted specific qualities of the team that contributed to their score. “We have players [who have] sheer experience being in water polo for the last four years,” says Centeno. “They have good ball-handling control…and communication [as] they are all good friends.” By the end of the third quarter, the girls amassed a 15-0 lead.

In the last quarter, the girls had failed to block the opponent’s shot from the half life, allowing one point to slip away. Although there were  many successful scores from the team’s drivers, Captain Zoe Atkins admitted that her team is always searching for improvements. “As a team, we all enjoy the sport,” Atkins says. “I hope we can set up better…instead of pure countering. We want to be better on our weaknesses.”

The team, consisting of nine seniors, hopes to endure until their season concludes in February. As a water polo player for all four years of high school, Atkins also encourages people to be in a sports team, especially water polo. “I think [water polo] is worth it,” said Atkins. “There are ups and down. [However,] you won’t regret it and [even] find it enjoyable.”

The team’s next game will be away at Schurr High School on January 30*.

*The date when this article is published skips the game against Paramount High (1/25).

Web Editor At The Aztec