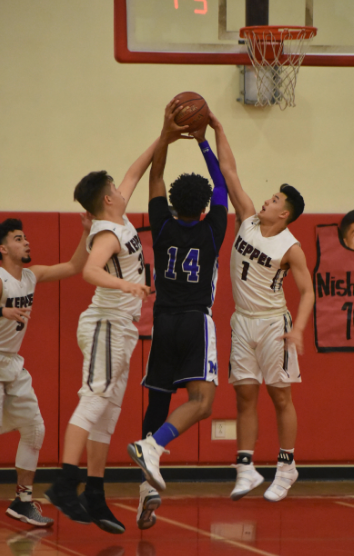 After a rocky win in the first round of CIF, Mark Keppel’s boys basketball team rebounded with a blowout win over Milken Community High School on Saturday night.

The Aztecs set the tempo from the start as three pointers by Michael Granados helped Keppel jump out to a 14-4 lead. The Aztecs put up a strong defensive effort as well as they compiled multiple blocks and steals to close out a strong first quarter.

However, the Wildcats, anchored by six foot five captain, Amitai Afenjar, continued to put up a fight throughout the first half. Afenjar finished with 19 points and was nearly unstoppable in the paint, but ultimately was not able to do enough to push his team to victory.

“He wasn’t a shooter which allowed me to sag off, and my quickness gave me an advantage whenever he got the ball. I can’t take all the credit because the team helped a lot,” says junior Esteban Rodriguez, who was tasked with guarding Afenjar.

Outside of Afenjar’s performance, the Aztecs handled the Wildcats easily in the second half, outscoring them 25-11 in the third quarter thanks to a barrage of three pointers by Granados and Rodriguez. The fourth quarter was no different, as strong post play by sophomore Diego Bustillo helped put the finishing touches on the 72-51 victory.

“When we looked over at them during warmups, we knew they weren’t ready for what was about to happen, so we just went out there and executed,” says Granados, who finished with a team-leading 28 points.

The boys basketball team was on fire for the vast majority of the game, knocking down 15 total three pointers which gave them the cushion they needed to pull away. “If we can make our shots, we’re a big threat. So luckily, our guys came out firing and hopefully they can continue this run for the next game and beyond,” says Assistant Coach Danny Do.

The hot shooting was one of many things that was working in Keppel’s favor, as they were also moving the ball well, getting the ball out in transition and coming up with stops on a consistent basis. “If we can defend, we’re a dangerous team. That’s our bread and butter and that is what we have been preaching since day one until now,” says Coach Do.

Although both this game and the previous game against El Segundo ended in wins for the Aztecs, Coach Do saw a monumental change in the way that his team played, claiming that this was the team that he saw during the duration of the regular season. “Before the game, I told them to play to the potential that we know [they] are capable of playing, and they definitely did that tonight,” says Coach Do.

The Aztecs are now headed for a matchup with the St. Bonaventure Seraphs on Tuesday evening, but according to Coach Do, as long as the players trust in their coaches and the scouting report, they are completely capable of pulling out another win and advancing to the CIF semifinals.