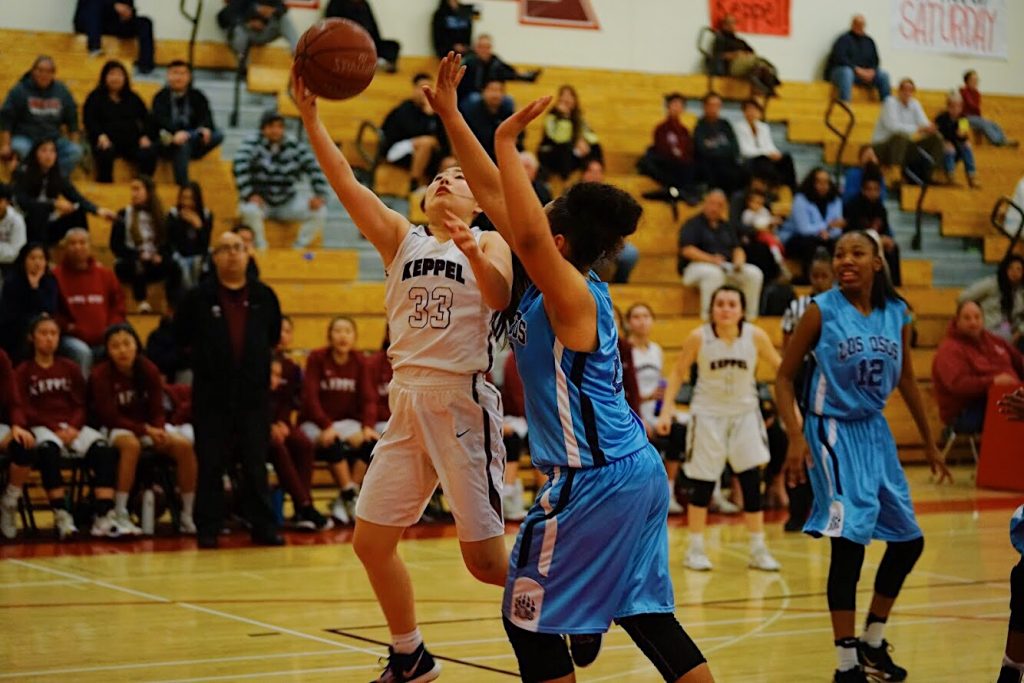 Sometimes, the best remedy to a difficult game is a stroke of luck. When senior Angela Garcia received a pass early in the fourth quarter and heaved up a wild, contested three pointer, the utter disbelief of many quickly turned to pure joy as her shot found the bottom of the net. The shot helped add to a lead that Los Osos High School could not recover from, as the Mark Keppel Girls basketball team defeated the Grizzlies, 56-43, in the first round of the CIF-SS playoffs.

“That play was unexpected. I thought that there were three seconds on the shot clock so I just threw it up. I heard my coach yell at me [and] I knew I messed up but luckily it went in,” says Garcia. “I think the shot helped the team in a way because we needed it. We were falling apart throughout the game and [the shot] gave the whole team more energy and enthusiasm.”

Garcia’s shot certainly provided a boost for the team, but it was the combined play of senior Vanessa Aguirre and junior Patricia Chung that helped the team survive the Grizzlies. The two accounted for 39 of their team’s points, as their offensive dominance helped the Aztecs maintain control throughout the game.

With the way that the game started, it looked like the Aztecs were going to cruise to an easy first round victory. Their man-to-man defense gave the Grizzlies trouble in the first quarter as the Aztecs took an 18-7 lead. However, the Grizzlies adjusted to the defense and fought back in the second quarter, cutting the deficit to two by halftime. The Aztecs struggled with turnovers and missed layups throughout the first half, and the same held for much of the third quarter as well. The Aztecs led 30-28 heading into a timeout midway through the third quarter, and Coach Jose Herrera knew that something had to change.

“I was telling them that they had to execute,” says Herrera. “This is the big time, this is the playoffs. This is what you guys worked for and it’s one and done. You win, you advance, you lose, you go home. It’s unfortunate that we did miss a lot of layups and open shots, but hopefully next game we clean it up a little bit and make those shots.”

Fortunately, they did not have to wait until the next game for the shots to start falling. Chung led a 10-2 scoring run that helped the team take a double digit lead, putting the game away for the Aztecs.

“Patricia has always been a key player for us. Last year, she didn’t play as many minutes as she did this year, but I’ve been telling everyone that this is her time to shine. Today, she proved it and she made plays. I’ve always said it; big time players make big time plays,” says Herrera.

The win was far closer than the Aztecs wanted it to be, and though the level of competition is much higher now, senior Catherine Dea asserts that the team expects more from themselves heading into the next round of the playoffs.

“We’re happy with the win, but we’re not satisfied because we know we can play better. Especially against Corona [Centennial], because they’re a much better team,” she says.

Centennial is fresh off a blowout win against Glendora High School, and the sixth ranked Huskies pose a much bigger challenge to the Aztecs. Yet, as the team prepares for the second round matchup later tonight, their win gives them reason to have confidence as they head into the game.

“We have to work on our offense and executing our plays, but for now, a win is a win. We still have a long way to go [and] our next game against Centennial is going to be hard, but we think we got this,” says Chung.

Up next: The Aztecs will be taking on the Centennial Huskies on Saturday, February 9 at 5 P.M. at Centennial High School.