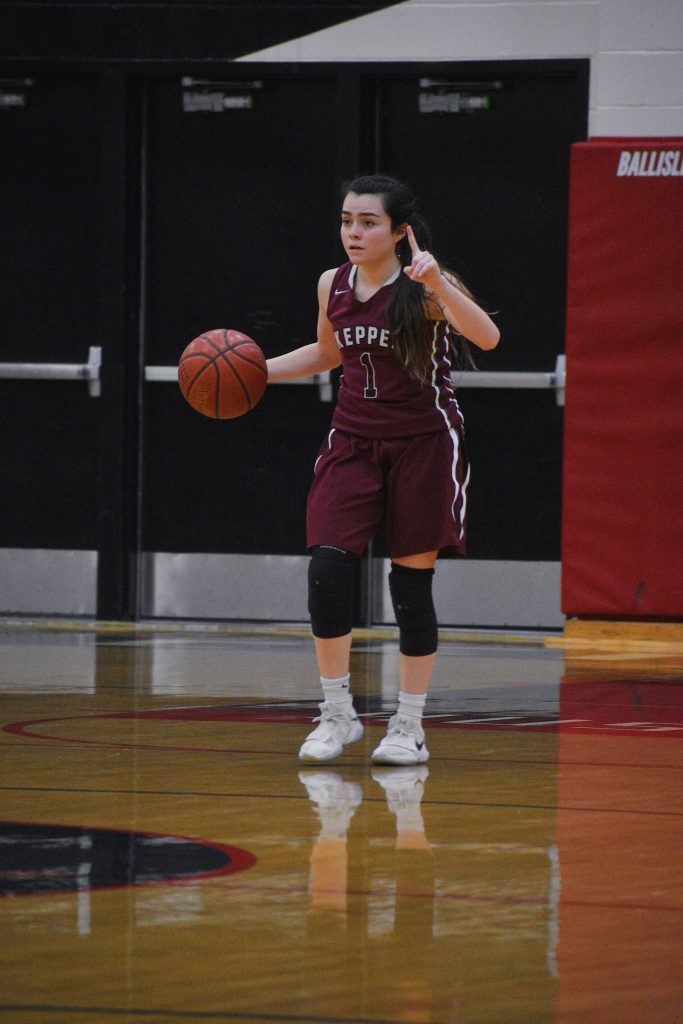 Senior Vanessa Aguirre dribbles the ball up the court in the first half. THE AZTEC/TIMOTHY CHUMAN

“We can make it all the way. This was a big win for us and we knew that if we beat this team, we have a chance at beating anyone,” says junior Grace Song.

Confidence is running high for the Mark Keppel Girls Basketball team, and rightfully so. In a game that went down to the wire, the Aztecs defeated the sixth-ranked Centennial Huskies 55-52 to advance to the third round of the CIF-SS Division 1 playoffs.

“We have experience. We’ve been here before. They know this is crunch time and they stepped up,” says Head Coach Jose Herrera. “We have a senior-heavy team and they didn’t want to go home, and you saw that tonight.”

The seniors are certainly doing all they can to keep their season alive, and point guard Vanessa Aguirre has been at the center of those efforts. Despite the Huskies face-guarding her the entire game on offense, Aguirre still managed to put up 16 points, including clutch baskets when her team needed them the most.

“[Vanessa] just didn’t stop. She kept moving and made big plays. She keeps going and going and I’m hoping after this game, it shows other colleges and college recruiters that they have to take a gamble on her. She’s a special player,” says Herrera.

Though the statistics might say otherwise, the Huskies’ pestering defense certainly limited Aguirre’s game. Because the offense normally runs through her, the team had to adjust to the guard not having the ball.

“I tried my hardest to get open, and once I was able to have the ball in my hands, I tried to make a play as best I could. But I also isolated myself from the plays to open the lane for my teammates since my defender wasn’t helping,” says Aguirre.

Her selfless mindset was pivotal for the Aztecs as it provided opportunities for guards Patricia Chung and Cassandra Shimada to take over. Chung, who led the team in scoring in the first round matchup against Los Osos, was dominant against the Huskies as well, pouring in a team-high 23 points. However, it was Shimada’s aggressive playmaking in the absence of starting guard Cristin Lue that gave the team the boost that it needed. Though she only scored 10 points, her timely layups played a huge part in shifting the momentum of the game to help the team pull out the victory.

“Since Centennial’s game plan defensively was to deny Vanessa the ball, I knew I had to try and create somehow and score. So, I kept driving in and it paid off in the end,” says Shimada.

Herrera takes pride in the play of his guards, and he acknowledges that because of it, his team is advancing to the next round of the playoffs.

Yet, the game was far from an easy victory for the Aztecs. The teams went back and forth and while the Aztecs seemingly had an answer for every run that the Huskies went on in the first half, the momentum began to shift into the Huskies’ favor in the second half.

The teams continued to exchange baskets in the fourth quarter before Chung and Shimada combined to go on an 8-0 scoring run, giving the Aztecs a 53-45 lead with less than two minutes in the game. The Huskies were not done yet, as they proceeded to go on a 7-0 run to cut the deficit to one with 25 seconds left, but a pair of free throws by Chung sealed the game. 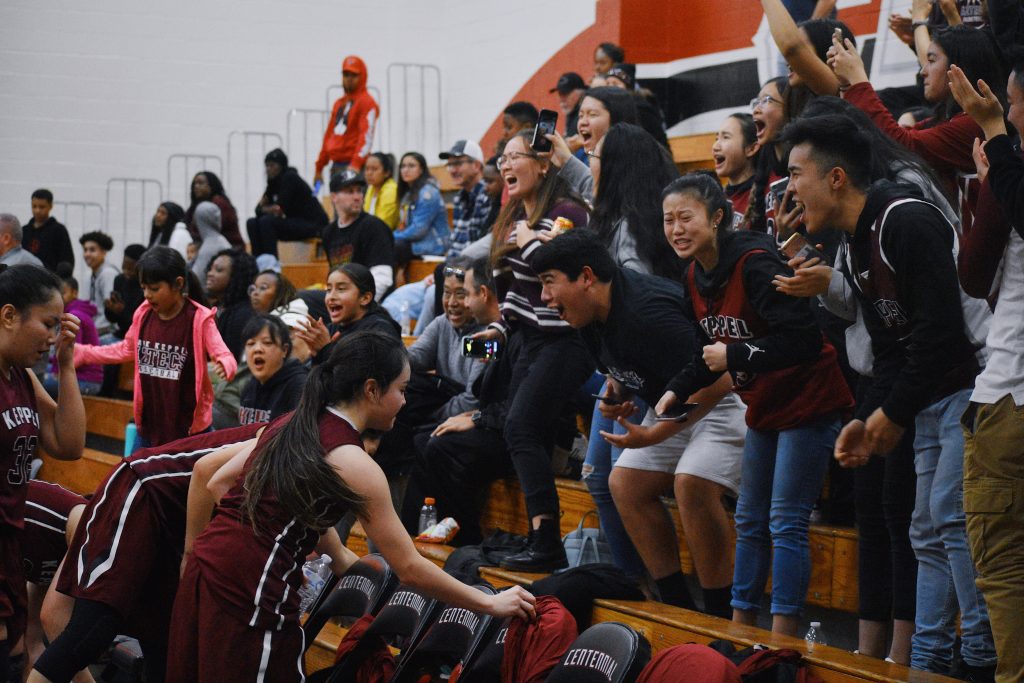 The large crowd turnout cheers on the Aztecs as they return to their bench victorious. THE AZTEC/TIMOTHY CHUMAN

“We’ve seen [Centennial] before in the summer, and we’re not going to back down because we know we can compete with anyone in this division. Now, it’s the question of if we’re going to execute and defend, and today, we did what we had to do,” says Herrera.

It remains to be seen if the Aztecs can do the same against the top ranked Serra Cavaliers on Wednesday night, but their victory gives them plenty of reasons to be optimistic heading into the game.

“I think the win against Centennial really got us excited going into the Serra game. The team right now is stronger than ever and when everybody is on their game, we’re a pretty good team,” says Aguirre.

Up next: The Aztecs will be taking on the Serra Cavaliers on Wednesday, February 13 at 7 P.M. at Mark Keppel High School.