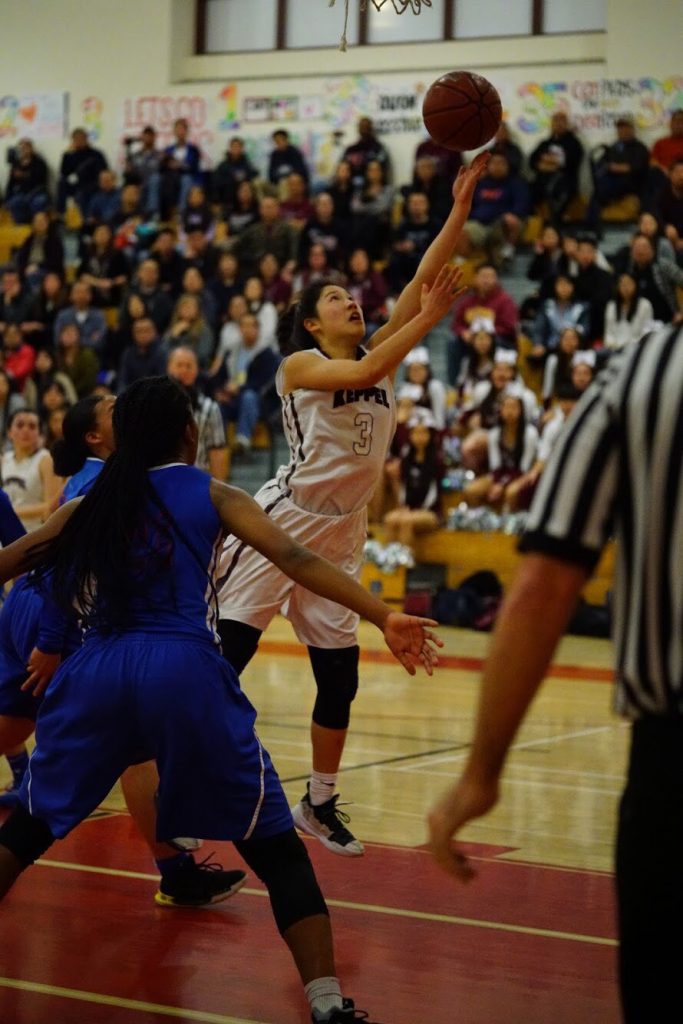 “This team will probably go down in my opinion, and in many people’s opinion as the greatest Keppel team ever because what they’re doing, they’re doing it in Division 1, and that’s never been done by any Keppel team.”

These are high words of praise from Girls Basketball coach Jose Herrera, but they are more than fitting for the tenth-ranked Aztecs after they upset the top-ranked Serra Cavaliers, 44-40, on Wednesday night in the quarterfinals of the CIF-SS Division 1 playoffs.

The Cavaliers are a year removed from a CIF State Division 1 title, but after losing eight seniors from their championship team, the team has had to rely on the likes of Alexis Tucker, a four-star commit to Texas Tech University. Tucker ranks among the top 70 players in the nation, and as the centerpiece of the Cavaliers’ offense, her injury at the end of the first quarter was a devastating blow for the team.

She returned later in the first half only to meet her match in senior Catherine Dea, who was tasked with guarding Tucker and held her to only 12 points, well under her season average of 21.8 points per game. While her defense on Tucker was impressive, it was her willingness to take charges and make the small plays that helped her team out the most.

“Those [small plays] are key. If you ever want to be a championship team, you have to have players that can do the dirty work and Cat does everything,” says Herrera. “Cat does the things that don’t show up in the scorebook or in the newspaper and her defense is just impeccable.”

Though she may have had a disadvantage in height, Dea did not back down from the challenge. “I had to get in her head, so I tried to annoy her, tried to push her a little bit and she did get mad, but the refs didn’t call much,” says Dea. “She was playing physical with me, so I just did it back to her.”

The Aztecs’ stifling defense helped them control the game from the start, and despite the first half going back and forth, junior Patricia Chung and senior Vanessa Aguirre anchored the team’s offense to give them a seven point halftime lead. The battle between Dea and Tucker was not the only physical part of the game, as the referees let the teams get away with rough styles of play.

Chung’s overaggressive defense, however, forced her to sit after she picked up her fourth foul early in the third quarter, leaving the Aztecs without the game’s leading scorer for the majority of the second half. Though Keppel led for much of the game, the Cavaliers’ stepped up their backcourt pressure, causing problems for the Aztecs and allowing them to cut the deficit to one early in the fourth quarter. However, the Aztecs were able to settle down and fend off the rally to preserve their lead..

“When I was sitting on the bench in the third, I just wanted to bring that energy for them and keep cheering them on and they did their thing. They stayed in front on defense and I just wanted to keep it going,” says Chung.

She did exactly that, as she re-entered the game with seven minutes left and scored six of her team’s next eight points to give her team a six point lead. Her free throw with 18 seconds left sealed the deal for her team, capping off a game-high 23 point effort for the star junior.

“She’s been playing big. She’s always played big. I know she has those capabilities, I knew she could do this back last year and I always told her that her time would come. Guess what? You’re seeing a star blooming right before your very eyes,” says Herrera.

With Chung and the seniors leading the way, the team has the championship ring in sight, but they must first get through Chaminade College Preparatory High School on Friday night. The fifth-ranked Eagles dismantled Valley View High School on Wednesday night, and after losing in last year’s CIF-SS Division 1 championship game, the team is surely vying for revenge. However, the Aztecs have proved time and time again that rankings mean nothing, and they look forward to embracing the underdog role once again in the semifinals.

“We just knocked off the number one team in the division and our confidence is as high as ever, but we’re there for each other on and off the court and we just want to get that win no matter where it is. We can go for that ring this year and we will,” says Chung.

Up next: The Aztecs will be taking on the Chaminade Eagles on Friday, February 15 at 7 P.M. at Chaminade High School.