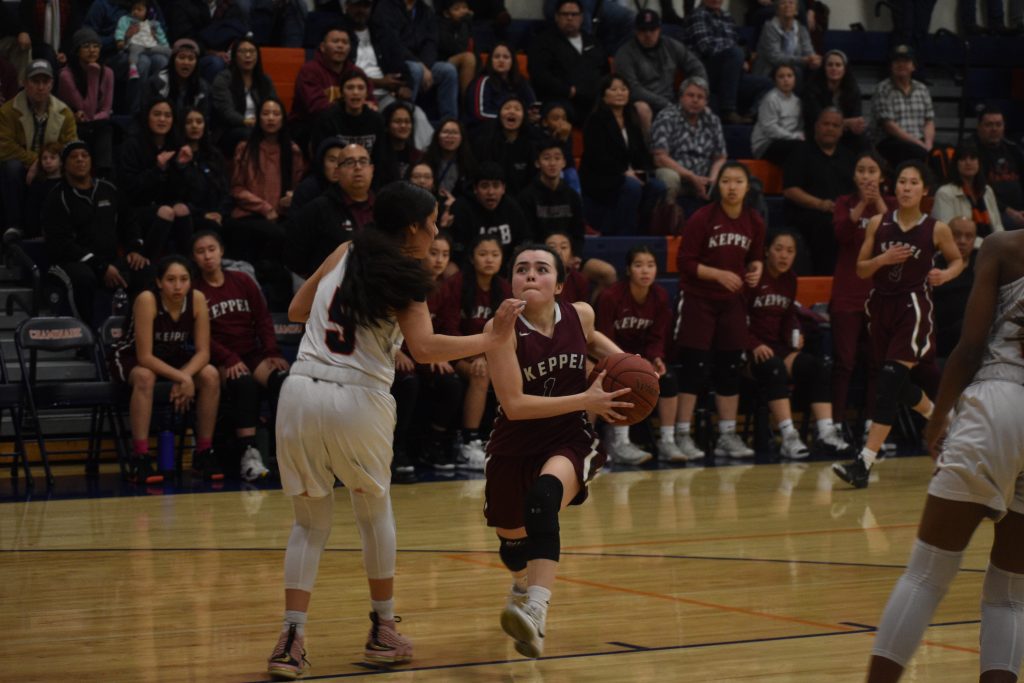 Senior Vanessa Aguirre maneuvers her way through the Chaminade defense for a tough layup in the second half. THE AZTEC/TIMOTHY CHUMAN

It was not their game.

Every team has their fair share of off days, and unfortunately for the Mark Keppel Girls’ Basketball team, theirs came at the most inopportune time. The Aztecs’ shooting went ice-cold on Friday night, allowing the Chaminade Eagles to cruise to a 70-46 victory in the CIF-SS Division 1 semifinals.

“Unfortunately, our shots weren’t falling. Theirs were. It was their night and that’s the way the game goes,” says Coach Jose Herrera. “It’s a game of streaks and they had a great streak going.”

The Aztecs shot 25% from the field, and after exchanging baskets for the first few minutes of the game, they simply could not find the bottom of the net. Shot after shot rattled out for the team, making it impossible for them to get anything going.

“We couldn’t hit the shots we normally make. It was extremely hard to build up the intensity to the same level we normally play,” says senior Noelle Wong. “We were off tonight and it showed in our game.”

On the other hand, the Eagles seemingly could not miss. Their scoring barrage was led by junior Jasmine Rodriguez, who knocked down five of her team’s 10 three-pointers on her way to a game-high 23 points. The Aztecs also struggled to contain the dominant interior presence of junior Alexis Whitfield, who scored 15 points and corralled a game-high 21 rebounds .

“Kudos to them. They executed their game plan, but they shot the ball at a high percentage,” says Herrera. “When you shoot [at] that high [percentage] and score that many points, especially that many three pointers, it’s tough to beat teams.”

The Aztecs only trailed by two midway through the first quarter, but a 12-2 scoring run gave Chaminade a 21-9 lead that Keppel could never recover from. The Eagles continued their hot shooting throughout the first half, and despite a handful of baskets by senior Vanessa Aguirre, the Aztecs were outscored 28-13 in the second quarter, giving Chaminade a 40-24 lead at halftime.

The Eagles continued to build their lead out of halftime, capped off by a wild three-point buzzer beater at the end of the third quarter to give them a 32 point lead, their largest of the night. The Aztecs started to make a comeback in the fourth quarter behind Aguirre and junior Patricia Chung, who combined to score 32 points on the night, as they outscored the Eagles 14-6, but the deficit proved to be too much to overcome.

“I thought we played with a different intensity in the fourth quarter compared to the first three, and that’s the way we normally play. I think we were just a little passive; we came with the right game plan, we told everybody what to do, but we just played a little passive to begin with, and unfortunately, by the time it hit the third quarter, fourth quarter, it was too late,” says Herrera.