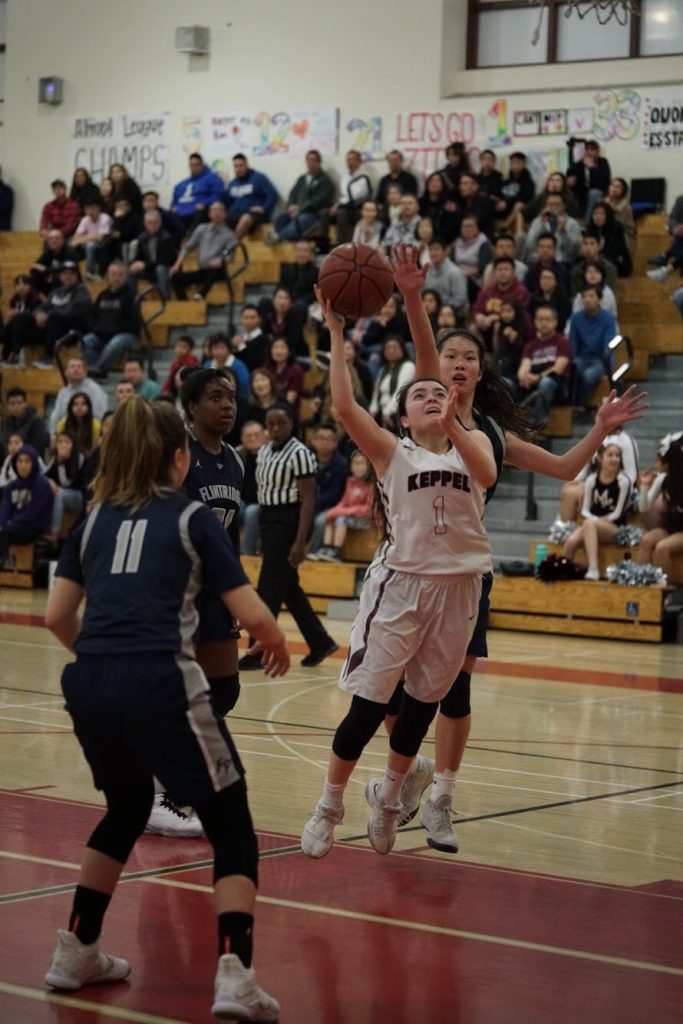 Senior Vanessa Aguirre scores two of her game-high 27 points late in the second half. THE AZTEC/VINCENT BAGABALDO

“This has been a game in the making. Everybody has been waiting for this one and the girls stepped up,” says Coach Jose Herrera.

With two of the strongest teams in the San Gabriel Valley squaring off on Thursday night, the Mark Keppel Girls’ Basketball team certainly rose to the occasion as they outlasted the Flintridge Prep Rebels, 73-58, to advance to the southern regional semifinals of the CIF State Division 2 playoffs.

“We wanted to play someone in the area, especially Flintridge Prep, so when we had the opportunity in state, it meant that we were going to come out a lot stronger and more determined than ever because we want to be known as the best team in the area,” says senior Vanessa Aguirre.

While the win all but cements Keppel’s status as the top team in the area, the Rebels gave the Aztecs all that they could handle. After trailing by only two heading into the second quarter, the Rebels found themselves in a hole, as Aguirre’s 16 points earned in the first half helped the Aztecs build a double digit lead going into the second half. The teams traded baskets throughout the third quarter before Flintridge’s pesky zone defense got the Rebels back into the game, and behind big three-pointers by guards Andie Kim and Ashlyn Zhang, they cut the lead to 54-50 with three minutes remaining. However, their comeback fell short as Keppel was able to regain control and put the game away at the free throw line.

The “big shot”, a clutch stepback jumper courtesy of junior Patricia Chung, was the finishing touch of a well-rounded offensive attack by the Aztecs. Chung, who had a number of timely baskets in the second half, added 17 points, while seniors Mia Heidt and Cassandra Shimada each scored in double figures.

However, much of the attention was focused on the matchup between Aguirre and Rebels’ junior, Kaitlyn Chen, two of the most highly regarded players in the area. Chen’s offensive arsenal was on full display, as her ability to score in the paint with ease and knock down jumpers helped her score a team-high 22 points in a valiant effort. Yet, Aguirre’s hot hand from three-point range and consistency at the free throw line allowed her to outshine her counterpart, as she poured in a game-high 27 points to lead her team to victory.

“[Chen] is a very good player. We had to make sure that we put a body on her constantly because once she gets loose, she’s dangerous,” says Herrera. “But [Vanessa’s performance] is not surprising at all. This is what she does and this is the moment that she’s been waiting for. She wasn’t going to let our season finish, so she took care of business both offensively and defensively.”

The Aztecs have had their fair share of struggles against zone defenses in the past, but their patient game plan helped them have success against the Rebels’ defense.

“We moved the ball really well. We passed it more to the middle and it opened more shots, and luckily, we were hitting more shots than the Chaminade game,” says Aguirre.

The loss to Chaminade in the CIF-SS Division 1 semifinals may have been hard to digest for the Aztecs, but they are more than ready to make up for the loss in the state playoffs. Their transition from Division 1 to Division 2 certainly aids their pursuit of a championship, and the win over Flintridge has them motivated heading into the regional semifinal matchup against Hamilton.

“[The team] is hungry. We got a gift being dropped down to Division 2 and especially being given the number one seed. Many teams wish that they can be in our shoes, so we have got to make sure we take care of business. The girls know what’s at hand, they know the goal; all they have to do is make sure that they execute,” says Herrera.

Up next: The Aztecs will be taking on the Hamilton Yankees on Saturday, March 2nd at 6 P.M. in the Aztec Arena.