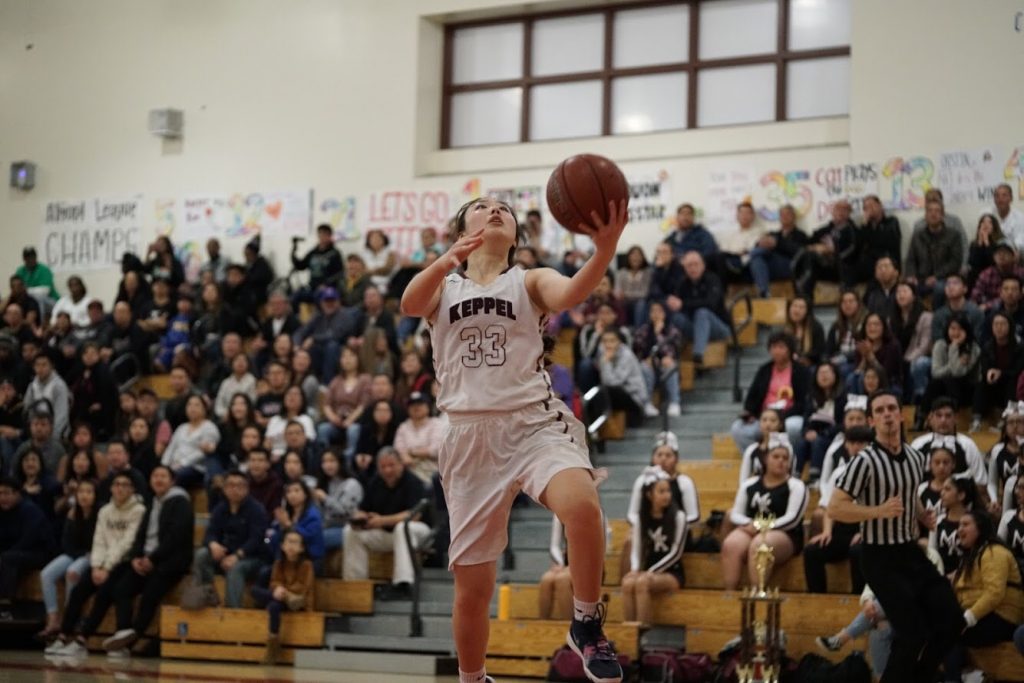 Senior Cassandra Shimada, who finished with 10 points, drives for a layup in the second half. THE AZTEC/VINCENT BAGABALDO

“Hope is a very dangerous word when it comes to sports, because when you give an opponent hope, anything can happen,” says Coach Jose Herrera.

In the CIF State Division II regional semifinal, the Mark Keppel Girls’ Basketball Team eliminated any chance of hope for the Hamilton Yankees, putting up an impressive 72-42 win on Saturday night.

The Aztecs wasted no time in asserting their dominance over the 12th ranked Yankees, outscoring them 18-11 in the first quarter.

“They were a lot bigger than us. Our main thing was to make sure to box out and keep pressure on the guards so they didn’t get the ball inside the posts,” says senior Cassandra Shimada, who scored a game total of 10 points.

The size difference proved to be no struggle for the Aztecs, who executed their game plan. The Aztecs used their ball-handling and speed to nearly double the Yankees’ score by halftime. The Aztecs’ tenacious defense complimented their offense, as they ended up with 21 steals by the final buzzer.

“We knew we had to keep the momentum going,” says senior Vanessa Aguirre, who scored a game-high 18 points. By running zone drills during practice on the days leading up to the Saturday game, the Aztecs were able to successfully follow through with their rotations. With a 12-point scoring run in the second quarter, they were able to drive into the paint with ease, giving themselves a comfortable lead heading into the second half.

“At the last game against Flintridge Prep, we gave up too much points,” says senior Catherine Dea, who added 11 points. “This game, though, our defense was much better.”

With their 30 point blow-out over the Yankees, the Aztecs will be advancing to the CIF Division II Girls Basketball Southern Regional Finals. “We have 11 seniors, and we are very much experienced,” says Coach Herrera.“They had a dream as freshmen at getting to this specific point.”

Having not been able to advance to the CIF State regional finals in four years, the Aztecs are very much enthralled to have the opportunity at competing. “We’re excited, we’re confident, and we know we have to work very hard in order to win just like this game – we can’t take anyone lightly,” says Dea.

Up next: The Aztecs will take on Rolling Hills Prep on Tuesday, March 5th at 7 PM in the Aztec Arena.

Co-Editor-In-Chief At The Aztec
Selina Martinez