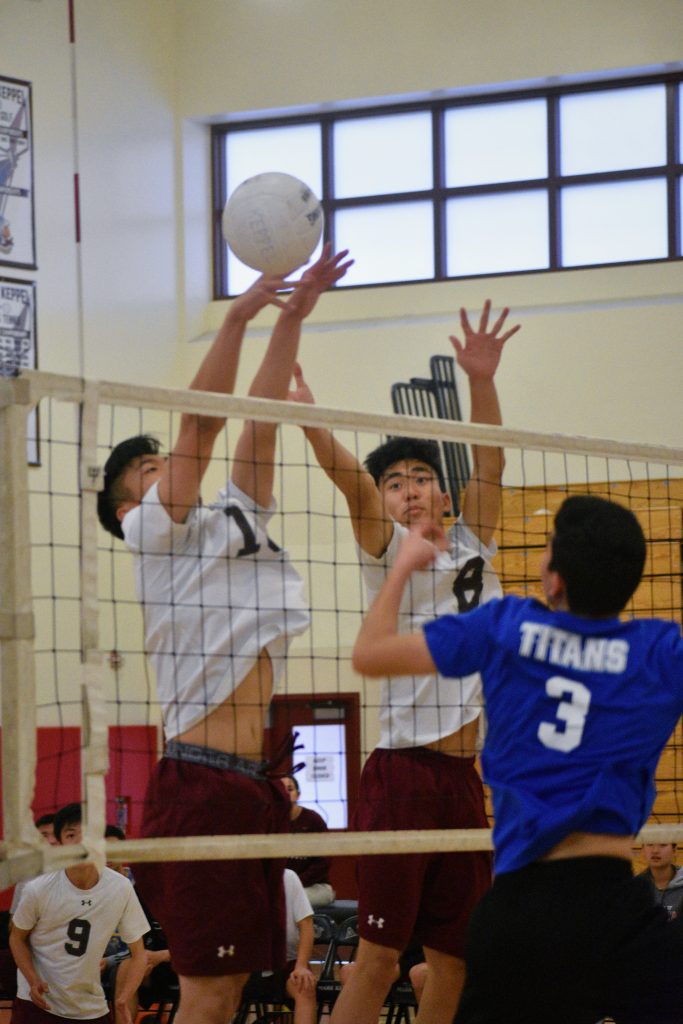 Seniors Jeffrey Huang and Joey Siu try to block the ball in the third set. THE AZTEC/TIMOTHY CHUMAN

This year, this team is different. The Mark Keppel Boys’ Volleyball team has been on the rise in recent years, qualifying for the CIF playoffs the past two years after not making it past the regular season since 2013. However, after two quick first-round exits, the Aztecs came into this year’s playoffs looking for a different outcome, and they got just that with a dominant 3-0 victory over San Marino on Tuesday in the first round of the CIF-SS Division 4 playoffs.

The focus was evident throughout the season for the Aztecs, as they won their first league championship in 15 years. The coaching staff is pleased to see the success that their team is having, but they acknowledge that changes had to be made within the program to reach the competitive level that they are at now.

“A lot of [what goes into the success] is that it takes time to build up the culture, to establish a norm of winning. These guys have worked hard and we have a lot of experience on the team, but this year, we’ve spent a lot of time as coaches being more strict and pushing the guys a lot harder,” said Coach Francis Chu.

The work ethic certainly paid off for the Aztecs as their disciplined approach helped thwart any runs that the Titans made. San Marino got off to a strong start, taking a 10-5 lead in the first set, but the Aztecs fought back and scored the final three points to win the first set, 25-22.

“I think we saw that it was a home CIF game and there was a crowd and because we usually don’t get that many people to come out, people started getting nervous and we forgot about the fundamentals,” said Li. “Our coach said to stick to the basics, to go back to what we’re good at doing and that’s how we came back.”

The Aztecs kept that mentality going into the second set, and while the teams traded points behind the strong offensive play of senior Joey Siu and San Marino senior Eric Fu, the Aztecs were able to hold off their opponents to win the set, 25-21.

“[Fu] definitely did a good job. With players like that, we know that they’re going to score, and every time we can slow them down and get a score off of a defensive play is a bonus for us,” said Coach Chu. “We stopped him a few times but a good player like him is going to get his [points], so we tried stopping him as often as possible but it was the rest of the game that was more important.”

After Keppel jumped out to a quick 6-1 lead to start the third set, San Marino continued to put up a fight. Both teams had their fair share of mistakes in the set, but neither could fully capitalize and run away with the set. The Aztecs, however, did just enough to edge out the Titans, giving them a 25-22 win to clinch the first round victory.

“It’s good to have a lot of seniors who have experienced the pressure, who have experienced me getting on their case before. I thought that especially in that last set when we were starting to give the game away, the seniors really came out and played consistently and that kept us steady to push through to the end,” said Coach Chu.

The team boasts nine seniors, and their leadership will be pivotal as they go deeper into the playoffs. Those who were on the team two years ago will be looking for revenge tonight as the Aztecs face off against the fifth-ranked Windward Wildcats at home in the Aztec Arena. The Aztecs were eliminated from the playoffs by the Wildcats in 2017, but as shown by their success thus far, this team is more than equipped to pull off a potential upset.

“There’s still things we should improve on and that’s what practice is for. As long as we can work on things that we need to, I think we can win,” said Li.