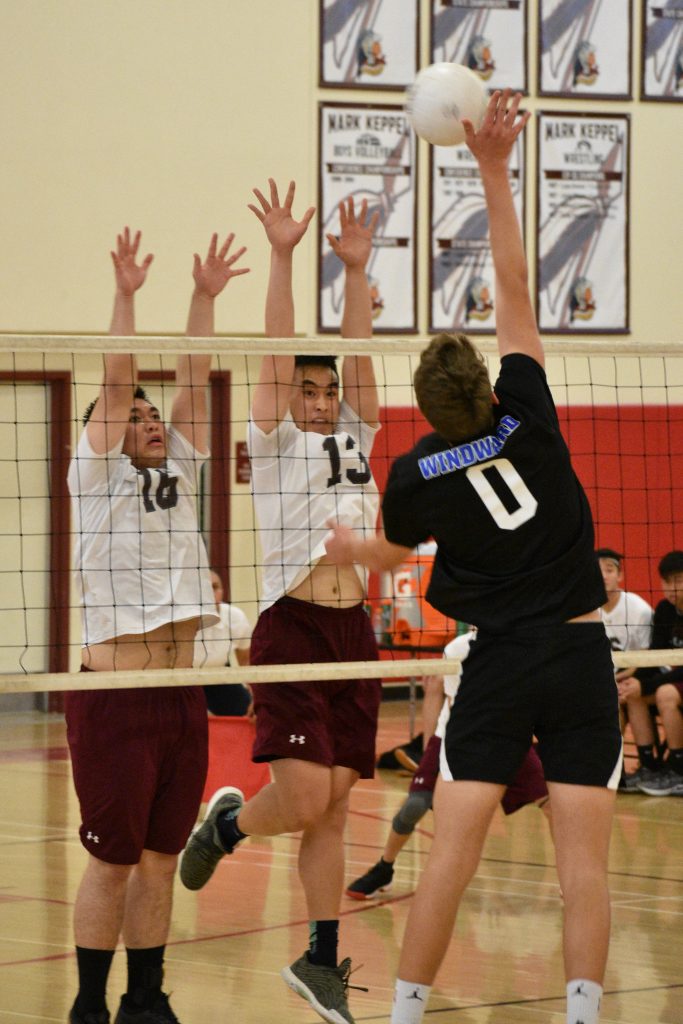 In his seven years of coaching, Head Coach Francis Chu has never had a team quite like this year’s Boys’ Volleyball team. Their season came to a disappointing end on Thursday, as they lost 3-0 in the second round of the CIF-SS Division 4 playoffs to the fifth-ranked Windward Wildcats. Yet, as Coach Chu reflected upon their season, he could not help but chuckle and point to the volleyball championship plaque in the Aztec Arena, one that would soon show his team’s first Almont League championship in 15 years.

“This is the best season I’ve had here at Keppel. It is a tough way to end the season, but I’ve been here so many times. I told the boys that there’s nothing to hang their heads about. What they accomplished here is monumental as far as the history of the school goes, so there’s absolutely no reason to hang their head,” said Coach Chu. “It’s part of the building process for the program, and what they did here lasts much longer than today, and when they leave it continues on.”

According to Coach Chu, the lasting effects of the team’s success are a product of the program’s change in culture, a shift that has been brought on by stricter coaching and higher expectations. However, the environment has been anything but toxic; rather, the passion and dedication has helped bring the program together, both on the boys and girls side.

“When I first became a part of the volleyball program my freshman year, I didn’t feel that sense of family like I do now. You have your girls and boys teams but that was about it. Coach Chu has emphasized the fact that we are one program, together, and we should want to support each other,” said captain Ian Ordonez. “Sure, winning does help bring a program together, but overall it’s the people within that program that set the tone and precedent for years to come and I think this year’s members are unlike years before.”

Ultimately, the unity and success starts with the seniors. The balanced array of seniors is not only the foundation of the team’s talent, but also their leadership both on and off the court.

“I owe a lot to these [seniors]. They got us to where we’ve never been before and that’s definitely nothing to gloss over. They definitely have been doing a lot of the learning, helping me know how to reshape the program so we can hopefully continue some of this success in the future. Overall, I’m proud of them because they led the way to get us here,” said Coach Chu.

Their leadership certainly helped the Aztecs get off to a good start on Thursday night, as they stormed out to an 8-3 lead in the first set. The Wildcats fought back and took an 11-10 lead, but Keppel responded with a run of their own to take an 18-12 lead.

“I think we caught them off guard, and I think the other team came in a little cocky. We were passing better and because we were playing well, they weren’t able to play with their strengths, so when things fell apart, it was when we started overpassing, giving them more opportunities to run a regular offense,” said Coach Chu.

Windward’s ability to get back to their regular offense put their offensive prowess on full display, and behind the outstanding play of Pepperdine commit Auden McCaw, the Wildcats fought back to win the first set, 25-18. Their momentum carried over into the next set as they dominated Keppel from start to finish, winning the set, 25-12.

“To be honest, it was so fast that even I didn’t really have time to react to it. It was so quick that I couldn’t even get subs in. That was definitely more of a mental breakdown,” said Coach Chu. “I don’t think our guys gave up, it was just finding non-solutions to a very simple problem with a very simple solution, which was playing good volleyball.”

It seemed as though the Aztecs found that solution in the third set as they took a 13-7 lead, but the Wildcats were able to make a final push and outlast Keppel, 25-19, to close out the match.

“[Windward] played well. I don’t think they did anything special. We’re proud of our guys, but we definitely had opportunities we didn’t take advantage of. I think it’s just brand new for the kids to be playing at this level, this late in the year at this stage in the game, and I think we just couldn’t adapt fast enough,” said Coach Chu.

Though they could not pull off the upset, the loss certainly does not overshadow what the team was able to accomplish this season. With every new season comes a level of uncertainty about the possible success, but the Aztecs came together and did far more than they could have imagined.

“Going into this season, I was a little skeptical of what we would be able to accomplish. We lost a couple key starters last year and finding guys to step in and fill their shoes would be tough but overall we were able to do that and more,” said Ordonez. “This team just worked so well together and it honestly surprised me at first. We kept defying the odds and showing other teams that we were here to play and we could keep up with the best of them.”