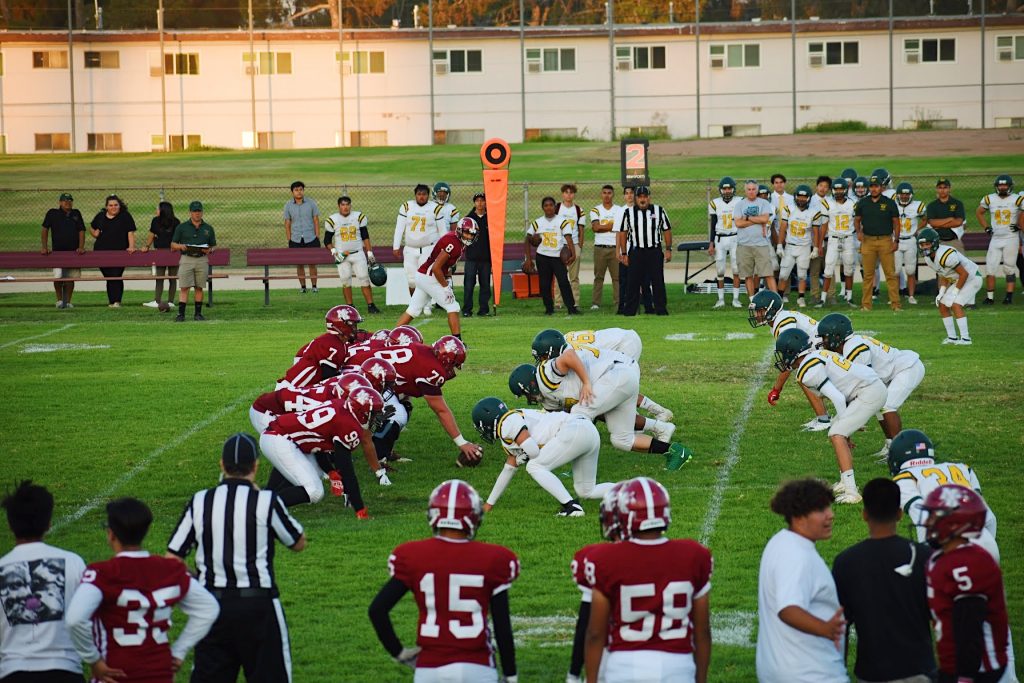 The Aztecs get in offensive formation to hike the ball to the quarterback. THE AZTEC/IZABELLA COFRESSI

Kicking off the football season, Mark Keppel’s football team suffered a loss in their first game against the Temple City Rams this past Thursday.

Two minutes and eight seconds into the first quarter, the Rams scored their first touchdown and successfully kicked the football within the uprights, giving them a seven point lead against the Aztecs. Despite ending the first quarter 14-0, the Aztecs were able to gain momentum in the second quarter with senior Andrew Escobar scoring a touchdown for Mark Keppel.

Carrying that energy into the second half of the game, both teams put their best offensive plays on display. During the first half of the quarter, Temple City was able to bring the ball into the end zone once again. The rams also scored an interception while being on defense at the five yard line, allowing them to earn another touchdown.

With only twelve seconds left in the third quarter, the Aztecs gained another two points with a safety, closing the third quarter with a score of 14-31. However, the Rams once again widened the score difference with one last touchdown in the last quarter. The game ended 14-38.

Junior Thais Chung says, “We all made mistakes and that’s what cost us the game.” Notwithstanding, Chung remains optimistic for the season ahead of them. He says, “I think all around, we did better, [with] the offense, defense, special teams and especially [with] both the energy from our team on the sidelines and the crowd.” The team expressed that the energy from the high school crowd gave them a feel of a positive atmosphere and an even bigger motivation to play to the best of their ability on the field.