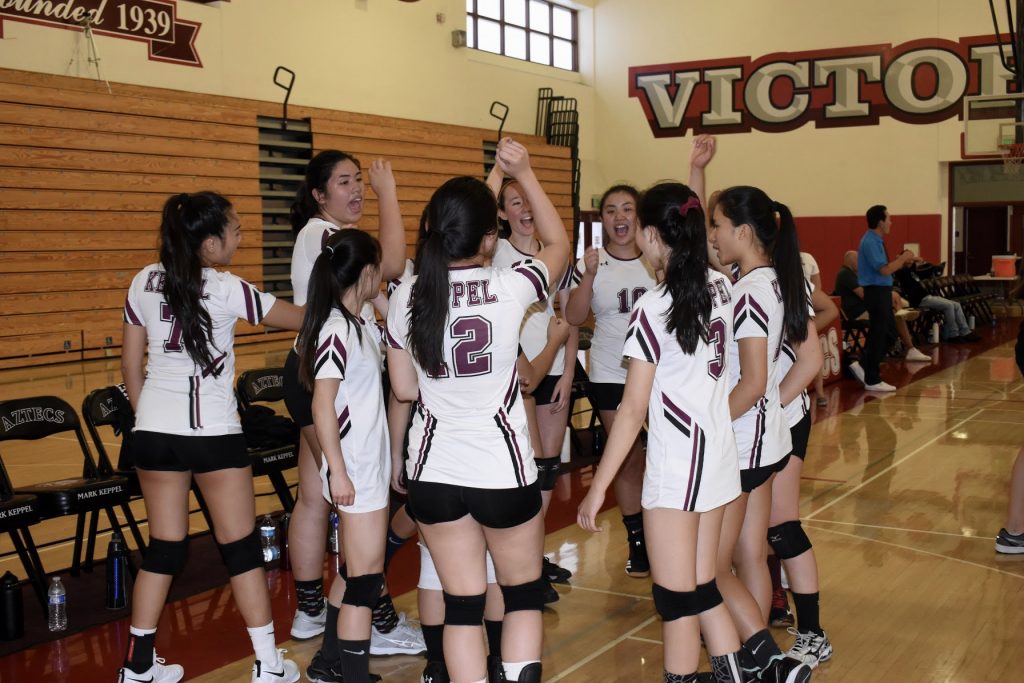 The Aztecs cheer before the start of their volleyball set at the first league game against the Spartans. THE AZTEC/MAPLE DUONG.

The Girls’ Varsity Volleyball team played their first league game of the season with high spirits against Schurr on September 12, but at the end of the day, the Aztecs lost to the Spartans with a score of 0-3.

The Lady Aztecs put up an incredible fight against the Spartans, attempting to maintain a lead throughout the first set as they made sure to uphold their defense. Despite senior Gloria Lu’s consistent blocks, the Spartans were able to put up multiple scoring runs. As a result, the Aztecs lost the first set with a score of 19-25.

During the second set, the Aztecs struggled to keep up with the Spartan’s offensive middle hitter. “They were covering us consistently, especially in the middle. They were also pretty successful at covering our blocks and our tips,” says junior Kyla Miyano. With the Spartans maintaining the lead throughout the set, the Aztecs were discouraged, losing the set with a score of 15-25. However, Miyano made sure to emphasize to her team that “the game [wasn’t] over yet.”

Putting on their best defensive faces as they heard the crowd cheer in the third set, the Aztecs were able to tie up the set score 7-7. As the set progressed, the two teams were neck to neck, consistently scoring one point after another. However, the Spartans sent up their best middle hitters to the net once again, allowing them to finish the last set with just four more points than the Aztecs.

Despite the loss, senior captain Leilani Hughes makes sure to maintain a positive mindset as she recounts the game. “We showed a lot of heart in this game. We didn’t get down on ourselves nor did we hang our heads. We just kept playing,” explains Hughes contently. Hughes is determined to continue playing her best, as she wants to “…make Coach Chu proud because he really believes in the team this year.”

In addition, Coach Chu looks forward to the rest of the season, regardless of the outcome of each game. “We aren’t going to win every single game. But I always like to come out of a season knowing that our defense is strong, because that means other teams have to work extra hard to beat us,” says Coach Chu.

The Aztecs hope to improve from this game in preparation for their next away game on September 17 against the Bell Gardens Lancers.